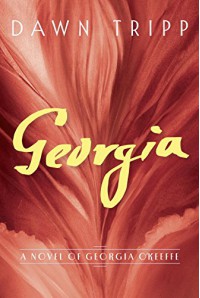 Inspired by the life of the extraordinary iconic American artist, Georgia O’Keeffe, the "Mother of American modernism",and her love relationship with, photographer Alfred Stieglitz;beautifully drawn, Dawn Tripp evokes emotion, complexity, passion, and creativity with her stunning delivery of GEORGIA.

Not only an exploration of O’Keeffe’s life, art, politics, and influence; however, more importantly, an example of the many tough challenges faced by women of the era. The 1920s marked a period of new freedom for women in America's modernizing urban culture.

"I found I could say things with color and shapes that I couldn't say any other way - things I had no words for." -Georgia O'Keeffe

Capturing the awareness, spirit and raw desires of two extraordinary artists-- Tripp creates imagining dialogue, and scenes between the two, as well as their circle of friends, family, and acquaintances—to create a mesmerizing blending; an infusion of fact and fiction—strong human dynamics of love and desires.

Georgia O’Keeffe is one of the most significant and intriguing artists of the twentieth century, known internationally for her boldly innovative art. Her distinct flowers, dramatic cityscapes, glowing landscapes, and images of bones against the stark desert sky are iconic and original contributions to American Modernism.

Early on, O’Keeffe mailed some of her highly abstract drawings to a friend in New York City, who showed them to Alfred Stieglitz. An art dealer and internationally known photographer, he was the first to exhibit her work in 1916. Soon thereafter, her life took on a drastic change--a passionate and often tumultuous relationship, to the desperate need to step out of his shadow.

Georgia O’Keeffe is a young woman, painting and teaching art in Texas, when she travels to New York to meet Alfred Stieglitz, the married gallery owner of 291, modern art promoter, and photographer. Their instantaneous attraction and powerful hunger for each other draw her into his world of art, sex, and passion, and she becomes his mistress and his muse. He would eventually become O’Keeffe’s husband. 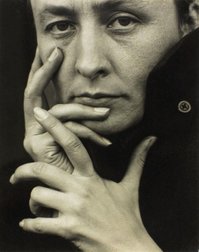 The language of letters –Intimate, vulnerable, complex. A woman of exceptional passion, a rigorous intelligence, and a strong creative drive. From 1915 until 1946, some 25,000 pieces of paper were exchanged between two major 20th-century artists. Painter Georgia O'Keeffe and photographer Alfred Stieglitz wrote each other letters — sometimes two and three a day, some of them 40 pages long.

The correspondence tracks their relationship from acquaintances to admirers to lovers, man and wife, and their marriage struggles. As her own artistic fervor begins to push the boundaries of her life, we see Georgia transform into the powerfully independent woman she is known as today.

The author was inspired and fascinated behind the discrepancies in fact as well as varied interpretation of the woman behind the icon. As Tripp reiterates, the critical language repeatedly used to describe and define O’Keeffe’s work by male critics during her lifetime was an important inspiration for the novel. In gendered terms—“limiting our perception of her art and influence.”

“Perhaps Stieglitz is not my life, but a detour from it.”

O'Keeffe's distinctive way of rendering nature in shapes and forms that made them seem simultaneously familiar and new earned her a reputation as a pioneer of the form. Georgia blazed new trials for women artists and in 1946, O’Keeffe became the first woman to earn a retrospective at the Museum of Modern Art.

Twenty-four years later, a Whitney Museum of American Art retrospective exhibit introduced her work to a new generation. Fifteen years after that, O'Keeffe was included in the inaugural slate of artists chosen to receive the newly founded National Medal of Arts for her contribution to American culture.

Nice cover in relation to the essence of the flower. The famousPetunia, where she magnifies the flower's form to emphasize its shape --representative of nature and her usage of flowers as a motif.

Impeccably researched, Tripp’s writing is lyrical, sensuous, provocative, magical and poetic—the canvas, the brush, and the characters come to life. With sparks of history, culture, sex, love, romance, art, creativity, and strong emotions-- the words jump off each page. Historic fans will delight in the life of the artist icon, and equally impressed with the talented storyteller. Captivating.

On a personal note: The Georgia O'Keeffe Museum in Santa Fe is the first museum in the US dedicated to a female artist, and its research center sponsors significant fellowships for scholars of modern American art. Having spent time in Santa Fe, NW as well as the Southwest, if you get an opportunity, visit the Georgia O’Keeffe Museum (fascinating)!