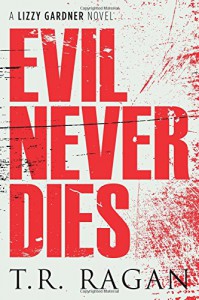 EVIL NEVER DIES (Lizzy Gardner #6) by T.R. Ragan with her grand finale in this riveting suspense series! Having read books #4-6 in the series, (need to go back and read 1-3), sad to reach the end of the series (bittersweet).

However, could not wait to catch up with the team – Hayley, Kitally, and Lizzy, the kick ass strong women of the Sacramento Lizzy Gardner Investigations, dealing with the worst offenders and hopefully handing out the payback they deserve. Vigilante --Lizzy is angry and nothing had been the same since Jared’s funeral, and Hayley continues to walk a fine line between compassion and cold heartedness.

After Jared, things have been tough; however, he would want her to pick herself up and carry on. As the book opens they are handpicking six criminals who need to be punished – The worst of the repeat offenders. Five men and one woman (Ghost who attacks the homeless), all of whom had committed numerous crimes- rape, stabbings, muggings, assault, and battery—Divide and conquer! They start checking off the list.

In addition, there is the thirty-eight year old liar and serial killer. (He has been at it for eighteen years) A killer who will never stop. He loves death and deceit. He killed both his parents five years ago. He wants to kill people and then writes in his journal and paints. Sacramento Strangler strikes again and philanthropist mark Kiel’s daughter found dead in Capitol Park.

For the last few weeks Lizzy’s focus had been on Wayne Bennett. Rich and powerful and he used the power to take advantage of young women – the worst kind of predator. Everyone thought they could trust the self-made millionaire. He was seduced by money and power and lost his moral bearings. One woman Tammy Walters has been outspoken about his work and now her eighteen year old sister, Miriam is missing. They are sure Bennett killed her.

Now a new client The Shady Oaks Nursing Home mystery, a mysterious note left behind for a husband about his wife's care.

Connections of the crazy serial killer and his past surface as they get closer to closing in. Will he ever die?

“Evil Never Dies – it never ends. You can catch a killer and throw away the key, but here’s always someone else out there slicing and dicing, killing people just because they can. For every evil person caught and locked behind bars, there’s two more waiting on the sidelines.”

As the series wraps up nicely, Lizzy is finished being a PI, taking losing Jared to realize this isn’t the life she wants to lead. She will get the girls back on track with lots to celebrate. Lizzy made a difference and left with some nice surprises. Each gal has their own path. Lizzy is a survivor, even traumatized by her past, she pushes forward to heal and help others. (loved the note from the author).

As I have mentioned in my previous reviews, love T.R. Ragan’s crime writing (glad you decided to transition from romance to thrillers—you are in your element), mixed with wit and humor and strong tough women- triumph over tragedy. Strongly reminded of Karin Slaughter- one of my crime thriller favorites.

What a great series! Hopefully we will catch up with the gals again in another series. Highly recommend. Cannot wait to see what’s next!