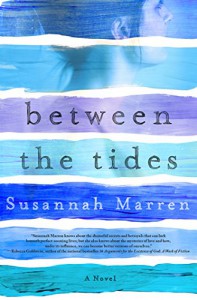 BETWEEN THE TIDES, debut by Susannah Marren explores the dark side of the American dream; of secrets and betrayal hidden beneath the perfect life.

Lainie Smith Morris, artistic lives a happy life in Manhattan, with her handsome surgeon husband, Charles with their four children. Her husband announces he has accepted a job in Elliot, NJ and they will be relocating. Charles has won again, as remembers a lesson of her grandmother’s is that the future is preordained. Nothing is coincidence, each of us experiences many lives.

With the move, Lainie is not happy, longing for New York. Her husband on the other hand, seems to be adjusting and the kids are going through many changes with the move. She desires creativity, inspiration, and is lost in the suburbs.

She meets Jess, a local resident and old high school friend; however, the friendship could turn to betrayal. Flashing back and forth with alternate narratives from Jess and Lainie, past and present we hear from two women—marriage, secrets, family, boundaries, choices, morals, betrayal, career, and friendship.

We also find Lainie, telling her children of a tale of the selkie, mythological said to live as seals in the sea but shed their skin to become human on land.

Male selkies are described as being very handsome in their human form, and having great seductive powers over human women. They typically seek those who are dissatisfied with their life, such as married women waiting for their fishermen husbands. If a woman wishes to make contact with a selkie male, she must shed seven tears into the sea. If a man steals a female selkie's skin she is in his power and is forced to become his wife.

Female selkies are said to make excellent wives, but because their true home is the sea, they will often be seen gazing longingly at the ocean. If she finds her skin she will immediately return to her true home, and sometimes to her selkie husband, in the sea. Sometimes, a selkie maiden is taken as a wife by a human man and she has several children by him.

In these stories, it is one of her children who discovers her sealskin (often unwitting of its significance) and she soon returns to the sea. The selkie woman usually avoids seeing her human husband again but is sometimes shown visiting her children and playing with them in the waves.

Stories concerning selkies are generally romantic tragedies. Sometimes the human will not know that their lover is a selkie, and wakes to find them gone. In other stories the human will hide the selkie's skin, thus preventing the selkie from returning to its seal form. A selkie can only make contact with one human for a short amount of time before the selkie must return to the sea. The selkie is unable to make contact with that human again for seven years, unless the human steals their selkie skin and hides it or burns it.

A cautionary tale, at times with a dark and moody atmosphere, complex relationships, sprinkled with poetic prose, and at other times the writing seemed to float all over the place. Even though filled with metaphors, was not connected with the characters, and the selkie parts, left me unengaged, disconnected, and impatient to finish.