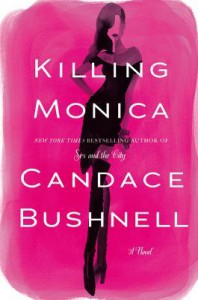 A special thank you to Grand Central Publishing and NetGalley for an ARC in exchange for an honest review. I also purchased the audiobook.

Bushnell returns with KILLING MONICA an attempt at portraying another character, a Manhattan writer, desiring to kill off her main character in order to reinvent herself-- and switch to historical fiction.

Pandemonia J. Wallis, a best-selling author of a series about a successful woman in New York surrounded by female friends – The Monica books. The series has been a hit, bringing PJ wealth, fame, and recognition. However, her audience wants more Monica. She wants her character to go away. To die. She wants to kill her. So she can be free to reinvent herself. Now 40-something author wants a do over.

However, the actress playing Monica (Sondra Beth Schnowzer), former best friend--with stunning looks and millions of viewer fans is a pain. Monica has grown to despise her. She has taken over her character and acts as though she owns it. A lot of bad friction here, since she slept with her boyfriend, and now cheating ex-husband has taken all her money in a divorce.

The two friends/enemies, and characters, cannot even compare to Carrie Bradshaw and Sex and the City gals; where the focus was on the sex lives of four female best friends, three in their mid-to-late thirties, and one of whom is in her forties. (Samantha Jones-my favorite, Miranda Hobbes, and Charlotte York). They actually had deep conversations. They were realistic. Nothing like these self-absorbed, champagne-drinking, air heads, fake, and non-interesting characters.

In addition, PJs publisher has rejected her new historical fiction book, and she hates men - miserable all the way around. Then there is Henry, PJs agent, and the sister-- which will leave you shaking your head with a twist at the end.

Unfortunately, not able to recommend this one. Do not expect another Sex and the City. Nowhere even close. No nice heroine. The book will most likely leave readers with a lingering negative thought: How does the author really feel about Sarah Jessica Parker, who ran away with her character, Carrie? Carrie took on the character, leaving Bushnell in the background—same as character in Killing Monica.