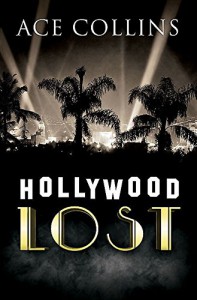 Talented Ace Collins returns after his smashing hit, Color of Justice which landed on my Top 30 Books of 2014 , a 5 star winner might I add, many of these on my list are rapidly making movie deals; here’s hoping for another with these two.

HOLLYWOOD LOST, a novel of intrigue, suspense and light romance with a page-turner whodunit mystery, leaving you guessing "what is real and what is fantasy."

Set in 1936, deep in the heart of Hollywood’s Golden Age, in a city of glamour, greed, and wealth, a ruthless serial killer is at work, murdering and strangling beautiful and glamorous young women.

Los Angeles Homicide Chief Detective, Bill Barrister believes the murders are connected to Galaxy Studios, the crown jewel of the movie industry. The first woman was discovered in June, 1935 on a beach outside Malibu. The second, only a few months later, found tossed in a vacant lot in Beverly Hills. The third, dumped in an alley behind the restaurant of the stars. They all have a common theme; a broken match stick and all wearing the color blue.

In the meantime, young and beautiful twenty-one year old Shelby Beckett, is thrust into a Gatsby- like lifestyle far different than her Cordell, Oklahoma childhood where she learned to read, sew and cook, and all she wanted was to have a happy marriage with children one day. For the past three years it had been her paycheck that had kept the hounds away from her family’s door, utilizing her skills as a seamstress at a local dress shop. However, due to the Great Depression, her family had no other choice but to pick up and move to California to try and find work. Maybe things would be different here, as she was not going to get caught up in the Hollywood lifestyle.

Galaxy Studios was the crown jewel of the movie industry, headed by Jacob Yates with top talent led by the king of the box office, handsome, arrogant and charming, Flynn Sparks and his rival, Dalton Andrews.

Sparks had grown up poor in Gary, Indiana and migrated to California in his late teens, until the good-looking boy was discovered by Yates, rewriting his history. Sparks lived on the edge and had no fear of death, an adventurer living for thrills and excitement, a womanizer, and made millions for Galaxy. His nightlife consisted of women, parties, drinking and fighting and was always in the headlines with a different woman on his arm or in his bed. He was always on the prowl for a new conquest. Rival, Dalton Andrews, another looker, and poor boy from Kentucky, made rich-- did not care for Sparks and his latest bet with Sparks was his own Packard.

In the mix of things of course is Ellen Rains, Hollywood's most elite gossip columnist. She was the kind of woman who knows every skeleton in every closet. She got the drop on the stars and splashed the dirt to the world with her daily columns in newspapers, magazines, and radio shows. It appears she may also have an inside connection in the police department.

As the murders continue and the body count rises, Ellen and Yates have to protect Galaxy by using an innocent girl, Shelby to throw off the suspicion from their leading man, while an evil madman continues to kill, now known as the Hollywood Madman.

Ironically, Flynn Sparks is always the last to see the victims alive. Now the heat is on pointing to Galaxy Studios; however, the cops have to tread softly, as they represent most of the livelihood and income in the town and they have the money and the means to protect their actors.

Little does Shelby know the job in the wardrobe department as seamstress, would make her popular with the city’s most elite and the talk of the Tinsel town gossip columnist. In a city known for fortune and greed, the farm girl must maintain her small town morals and try to stay one step ahead of the killer. She has her suspicions of the two leading men, and now the cops want to use this innocent, churchgoing girl to draw out the killer.

Someone is stalking, watching and waiting for the next innocent girl to be led astray. Murderer lurks in the shadows, an innocent girl, two leading mean, a determined cop, a studio boss, a gossip columnist and a serial killer and all traveling down a dangerous road. Shelby quickly discovers that in Hollywood, the studios rewrite people's pasts to fit the kind of people they want to sell to the public.

Hollywood Lost is quite the engaging read, drawing you in from the glamour of the stunning front cover as you re-live the Gatsby-like glitz of the Golden Age and Old Hollywood, with twists and turns, keeping you guessing the identity of the killer and the motive. Ace does an outstanding job of throwing you off track, with well-developed characters giving a sense of mystic and charm--like I want to see this movie, now with a front row seat; can imagine the cast and the fashion and style of the era.A clever twist, having the actors act out the movie in order to draw out the real killer, where past and secrets come to surface for a classic twist of Hollywood detective suspense.

The fast-paced novel seemed a perfect fit for author Ace Collins with the vintage cars, the Hollywood names, stars, and style, with a good black and white old classic detective mystery of fame and fortune. Loved Shelby’s strong personality and character while maintaining her innocence, morals, and integrity when tempted by so many.

On a personal note, was traveling from FL to NC, and with a beautiful spring day, a swing in the woods, light breeze, waves from the boats, overlooking beautiful Lake Norman at Jetton Park--I spent hours with my e-reader, devouring LOST HOLLYWOOD, until I reached 85% and my battery died! Horrible timing- frantic, dying to learn the identity of the killer and how it would end--had to exit my much coveted spot, and race to the nearest Starbucks to charge and finish.

A delicious whodunit with a classic twist of Hollywood glam, suspense, intrigue, mystery, romance, and some light spiritual faith; an ideal selection for book clubs and group discussions (included). If you love the stars of the twenties, thirties, and forties - Clark Gable, Cary Grant, Gatsby, and a good Hollywood mystery, this one is for you!

As an added bonus, readers get a sneak preview of Collins’ upcoming THE FRUITCAKE MURDERS one you will want to add to your reading list, set in the mid-twenties in Chicago during Christmas.