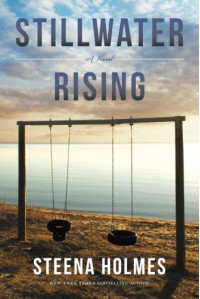 Steena Holmes' STILLWATER RISING (Stillwater Bay #1) is a heartfelt account of a small community, a shooting, its victims’ families, and the aftermath and devastation of a horrible tragedy.

In the town of Stillwater, there has been an elementary school shooting, which left many families shocked by this tragic event, taking the lives of innocent children. Jennifer’s ten-year-old son was one of the children who died in the school shooting, and while many citizens of the town go back to their normal lives, she cannot.

She is emotional and goes to the extremes wanting the school torn down or relocated— grief stricken, angry and hatred for the killer and his family. She is angry at everyone around her, as she cannot bear to look at the school, and baffled at her husband and daughters behavior. She thinks everyone should take the time to grieve and heal; does not understand how the people of this town can move on with their lives as though nothing happened.

Her husband Robert, just pretends the shooting never happened, spending more time with Julia, the killer’s mother. She and her teenage daughter, Charity, are constantly fighting, as she is ready to go back to school, and wants to move on.

Then there is Jordan Stone, principal at the school which is praised for his heroic behavior at the school, and his wife Charlotte urging the town to move on and face what is behind them. However, Jennifer and Charlotte are friends, so their relationship is further strained and possibly there was no hero, as everyone believed.

Julia is the mother of the problematic sixteen year old shooter, Gabriel (Gabe). Of course everyone now blames her and treats her as an outcast, as it was her son, so she should have had better control over the monster. You can image if you were a parent how you would feel if your son killed 12 people at a school before shooting himself. So in addition to grief, there is the responsibility for the others.

Samantha is a reporter and the first one on the scene and has a feeling everything is not as it appears and wants to get to the bottom of the case.

This was my first book by the author, and even though the book had a good set up, unfortunately, the audiobook was very annoying, narrated by Amy McFadden. It was very difficult to sympathize with the characters, especially Jennifer as the entire book was about her hatred and anger, blaming everyone and her continued gripping and complaining—after a while, it lost its luster. I have read other books of school shooting which were totally different.

Unfortunately, I was not connected to any of the characters on an emotional level, and hard to recommend this one. However, the one character, Julia was quite interesting, as would have liked more background, possibly more focus around her and the son, instead of so much focus on Jennifer, or more background of the ones who died, would have made it more intimate and personal.

Have to agree with some of the other reviewers—the story was not tied up--left dangling, for an unsatisfying read. And of course, the twist at the end, I saw coming, so no surprise. Possibly the next one in the series will feature more. I have heard some great things about the author and her other books—look forward to reading the others.